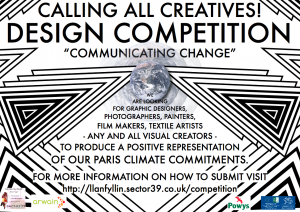 Deadline for Submissions: 11am 7th September 2017!

Help us communicate our critical message…

Since September 2016 we have been working with the aim to find the leaders of the future, creating exciting new opportunities for work, play and learning.

Our goal is to build an inclusive vision for schools and communities that recognises and understands our responsibilities as global citizens, while also meeting our commitments to the Paris Climate Agreement.

The targets the global community has to reach to have a realistic chance of avoiding climate change calamity are tough:

The targets for these objectives look like this on a graph and the treaty allows us thirty years to make the changes required: 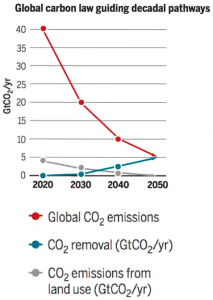 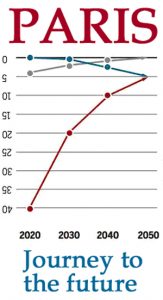 We think this is a powerful image and it many ways it represents a map to the future. However a steep slope down into uncertainty makes a daunting site, so we flipped it round to represent the rising up out of the mire of pollution and fossil fuel addiction to a bright new future. Much more appealing but it’s not the clearest image.. But hey, I am just an economics teacher what do i know?

The challenge is for all you creative people out there to turn this image into something inspirational that be shared and used around the world to inspire change and action.. Over to you!

Communicating such a vital message is a difficult challenge, and we are offering 3 fantastic prizes to the successful creative!

Your work will not only be used as the face of our schools wide campaign, which is educating and inspiring the young minds who will make the decisions of our collective future…We will also provide and plant 3 tree guilds in return for your creative input.

The guild comprises of: 1 heritage apple tree and a set of supporting plants to help with pollination, fertility and weed control.

The first guild will go to Llanfyllin High School as part of their transition to a green leader in North Wales.

The second will be for the winner of the competition.

For the third guild, the winner of the competition can choose 1 other school or educational body to receive a tree guild provided and planted by Sector39’s own Permaculture Academy!

Planting these  guilds will help us spread the word and inspire your school or institution to produce the climate change leaders we so badly need!

This competition video is the seed of an idea..

It really doesn’t have to be a masterpiece to win, just a cool idea,

Use images, words, sounds, music, spoken, hand drawn, photo-shopped or not, jsut give us your idea!

Submissions will be judged by a panel of Ysgol Llanfyllin Pupils, whose decision will be final