The theme for Week 3 was ‘Catch and Store Energy.’ The first taught session with the class aimed to explore how natural systems function – specifically in the context of soil ecosystems and trophic pyramids. To begin we introduced the theme of soil, and asked students to think about something they probably hadn’t really thought about before – ‘What is soil? What does it mean to you? What impact does it have on your wellbeing?’ The aim in asking this question was to encourage students to begin thinking about themselves in relation to soil, and to realise how much we actually depend on the soil. Here are a few of the responses we received:

It is clear that students have an awareness of the importance of the soil for our survival, but there are also some negative associations with ‘dirt’ and ‘filth’ and misconceptions about soil that must be addressed. Soil is not, for example, ‘almost anywhere and…in no short supply,’ and overzealous ploughing contributes to soil degradation while also releasing carbon dioxide into the atmosphere. These are issues and associations that we will address throughout the remainder of the course. The following is a particularly detailed response to the question:

Once the connection between the soil and our food supply was established, we proceeded to delve a little deeper into the processes involved in the carbon and nutrient cycles. In the hope that students would draw on their previous learning in Biology lessons, we asked them to write a short explanation of the process of photosynthesis, and to consider why photosynthesis is important for humans as well as plants. We received a range of responses, from relatively simple to quite complex:

The lesson concluded with a discussion of trophic pyramids and the organic and non-organic components of soil and their role in the carbon cycle.

The second session of the week took a slight divergence from the theme of ‘Catch and Store Energy’ with a re-cap exercise to assess learning over the past couple of weeks. We wanted to check where students were at in their knowledge and thinking about the topics we had so far discussed. See below for a couple of examples: 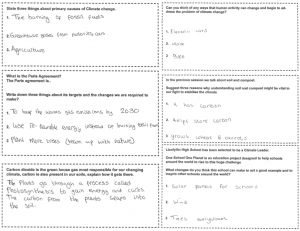 The main activity for the remainder of the lesson involved students watching a video from Abraham, a farmer living and working in Kenya who recently attended a Permaculture Design Course run by Steve in Uganda:

Abraham explained how his farming techniques were inspired by permaculture principles he had learned on the PDC, and he invited students in Llanfyllin to get in touch with him to ask questions. With this as their impetus, the students were then asked to write letters to Abraham, telling him about life in Wales and asking questions about his community farming activities: 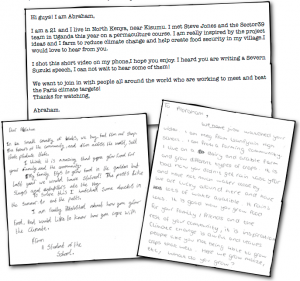 Abraham will be responding to the students’ letters with another YouTube video. We are hoping that we will be able to build up a constructive dialogue between Abraham and students at Llanfyllin High School.