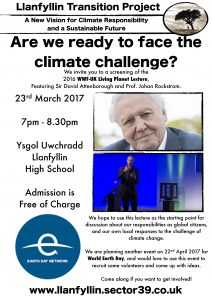 Rachel Carson, author of the groundbreaking Silent Spring, warned us many years ago of the dangers of allowing politics to influence our understanding of the natural world:

“The real wealth of the Nation lies in the resources of the earth — soil, water, forests, minerals, and wildlife. To utilize them for present needs while insuring their preservation for future generations requires a delicately balanced and continuing program, based on the most extensive research. Their administration is not properly, and cannot be, a matter of politics” Rachel Carson, The Silent Spring.

This begs the question what the role of science is when the politicians of the day can cast aside the dire and detailed warnings of the climate science community, despite the agreements and commitments they so publicly made to respond to this unfolding crisis?

We teach science in our schools yet we fail to adhere to it in our daily lives. What message does this send to the growing generation? The smoking ban, compulsory seatbelts in cars, these were considered responses to known and measurable threats, so why then do we ignore the much more serious warnings about climate and energy?

We know of the disproportionate hold the oil industry has over our economy, over the US presidency and the Russian rouble, yet to allow that reality to frame our responses will have dire consequences for all.

Last year we launched the Llanfyllin Transition Project, ‘Saving the Planet One School at a Time,’ with the specific aim of exploring these ideas across the whole community, and asking ourselves the question of how we can better prepare for what awaits us.

To begin, surely we are obliged to refer ourselves back to the science – what can we expect, what is happening, how much do we know? Also, we need to look at this information outside of the political and economic framework that surrounds the debate in the media.

The global scientific community will stage mass demonstrations to celebrate World Earth Day on April 22nd. This year’s event and campaign will fight against efforts to silence science and focus on creating and supporting knowledge sharing, community engagement, citizen science and stewardship.

We will be holding a series of events leading to Earth Day, the first of which is at Llanfyllin High School, 23rd March, building to the global event in April. It is free and will be informative, challenging and inclusive.