The principle that we explored in Week 5 was ‘Systems and Limits,’ as an introduction to systems thinking and specifically the role of feedback. Natural systems function through interacting feedback loops, and there is a lot we could learn from paying attention to this fact. To begin Wednesday’s session we asked students to give us their own feedback on our sessions so far. We received some positive feedback:

We also received some negative feedback (constructive criticism), which we could then use to refine our teaching sessions. One of the key pieces of feedback was that the students wanted to do more practical sessions and activities. We addressed this in Friday’s session (see below).

Following our feedback session from the students, Steve explained that if we are to overcome the challenges of anthropogenic climate change we will have to learn to think in a way that is totally different to the kind of thinking that gave rise to it. Our impetus for discussing a different way of thinking was Albert Einstein’s observation that ‘We cannot solve our problems with the same thinking we used when we created them’: 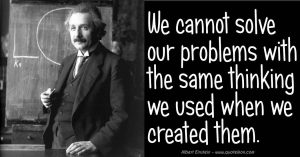 One such alternative way of thinking is ‘systems thinking,’ which would be the main focus of the rest of the lesson. Steve introduced students to the work of James Lovelock and his Gaia Hypothesis, as a different way of thinking about our role in and relationship to our global system. The backdrop to Steve’s explanation was a drawing by one of the students in the class from a previous session that seemed to capture quite nicely the implications of Lovelock’s message: 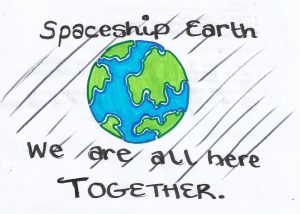 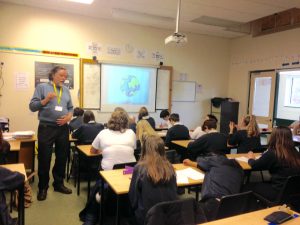 We then showed an example of a simple feedback loop through the analogy of James Lovelock’s ‘Daisy World Model.’ The model shows how ecosystems, climates and atmospheres function as self regulating systems with very definite limits. There is only so much room for fluctuation within the system, and after a certain point it collapses. It is through feedback interactions that these systems maintain themselves over time:

After watching the video we asked students to explain in their own words what the Daisy World model tells us: 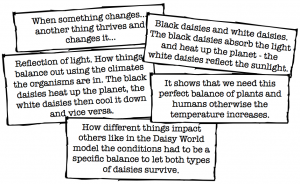 The first session concluded with a discussion of various different kinds of feedback loops, from the sugar-insulin cycle, to the ways our bodies react to high and low temperatures, to the relations between populations of foxes (predators) and rabbits (prey) in an ecosystem. As a summary of all of this thinking about systems and feedback we showed a remarkable video narrated by George Monbiot that illustrates perfectly how different systems subtly interact and influence one another in extraordinary, and often unexpected, ways:

To begin Friday’s session we asked students to think back to the ideas we discussed in the previous lesson, and to some of the videos we watched, and write down their thoughts about what we stand to learn from observing how natural systems function:

Students were then asked to draw their own feedback loops. Here are a few of examples of what they came up with:

We then showed a short video about Farmer Managed Natural Regeneration (referring back to concerns raised in previous sessions about the role of agriculture in tackling climate change). The video shows how through observing how natural systems function, and attempting to work with and emulate those systems, agriculture can be of benefit to the natural world – enhancing biodiversity while also benefitting human communities. This is the kind of different thinking Albert Einstein was talking about:

It was at this juncture that we took heed of the students’ feedback from the previous session and went outside into the crisp morning air to do a few practical games and activities to further explore systems thinking. The first game asked students to arrange themselves in a line alphabetically by name without talking to one another. Using only gestures and body language, the group was able to organise itself alphabetically – an example of a self organising system in action. 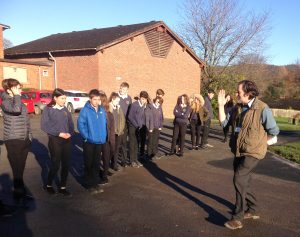 The second game aimed to demonstrate how dynamic, complex and unpredictable systems can emerge from just a few relatively simple interactions. Steve gave the students instructions to follow a simple rule: that they each had to select two people from the rest of the group (without letting anyone know who they are), and to stand equidistantly between them. What at first appears to be a simple task soon becomes much more difficult as each individual moves about in the group, shifting the targets of another:

The final outdoor activity was aimed at giving the students an idea of just how much of an influence humans have had on the global climate in a relatively short amount of time. We unravelled a 50 meter long piece of string, representative of the last 500,000 years. Every meter of the string represented 10,000 years, 10 cms represented 1,000 years and every centimetre 100 years. We wanted to give a sense of scale! Homo sapiens emerge around 200,000 years ago, agriculture about 7-8,000 years ago (about 70cms from the end of the string), and the industrial revolution about 200-300 years ago (just 2-3 centimetres from the very end of the string). Since the industrial revolution humans have removed the previously intact tropical forest belt, raised atmospheric CO2 from 285ppm to 406ppm, and used up approximately half of the reserves of coal gas and oil that had been stored below the earth’s surface for some 300 million years. 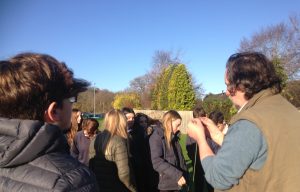 The session concluded with a round-up of the last five weeks, as we move into the next phase of the project – putting some of the ideas we have discussed into practice!