“Environmental politics needs a new psychological sensitivity, a capacity to listen with the third ear for the passion and the longing that underlie many of our culture’s seemingly thoughtless ecolgocical habits. Those habits may be surrounded on all sides by mighty, often creditable, certainly exhilarating human motivations.

One of the overarching issues we encountered over the course of our first five weeks of  teaching at Llanfyllin was the perceived threat of what we were talking about to the livelihoods of farmers. Many of the students in the class we were working with were from farming families, and on numerous occasions reacted almost instinctively against some of the data we presented, and some of the suggestions for alternative farming methods we discussed. The following extract from a student response, demonstrates this sentiment clearly:

Stop blaming farmers for everything. They aren’t doing anything wrong. Plug up the volcanoes! My Dad’s a farmer, but that’s bad because those jobs are creating too much CO2 and that means the world will end, so everyone will hate him as the world is “changing.”

These are, of course, understandable and legitimate concerns. Livelihoods are vitally important, and we are 100% in agreeance about this. Nevertheless, t

his instinctive reaction automatically shuts down dialogue. In spite of our best efforts to explain that we are not playing a ‘blame game,’ many students refused to engage seriously with

the material we presented because of these gut responses. The question is, therefore, how can we overcome these blockages to engage in constructive dialogue?

One approach we have considered using is to emphasise that farming really is the future. Steve even goes so far as to suggest that farmers will be the rock stars of the future! Farming will play a vital role in tackling climate change and developing a sustainable relationship with our local and global ecosystems. Farmers will become something like biodiversity wardens, or ecosystem stewards. Farmers will be the front-line interface between humankind and the natural world, ensuring a harmonious and balanced relationship with our ecology. Farmers will also become key drivers of carbon sequestration, making use of farming techniques that trap and store carbon.

As an illustration of one way in which farmers could become leaders of climate restoration in the future see the following article about agroforestry, which recently appeared in the The Guardian: 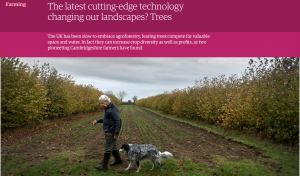 We are very interested in exploring other methods of overcoming these kinds of issues, and would welcome any feedback or suggestions.

2 Thoughts to ““Stop Blaming Farmers for Everything…”: Challenges in Communicating Change”