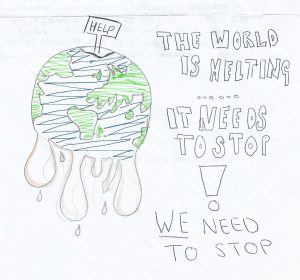 We have been back in school working with year 10 Welsh Baccalaureate students this week. On Wednesday Steve and Jemma gave a session based around the theme of ‘Observation.’ Jemma created a worksheet for students to work on as the lesson progressed. First students were asked about progress on their Severn Suzuki-inspired speeches. The class will continue to develop their speeches over the coming weeks.

Next, Steve introduced the role of observation in the scientific method. He showed a short video clip of the popular science presenter Prof. Brian Cox:

Students were later asked to define science for themselves:

Continuing with the theme of observation, the class then watched portions of the short film ‘The Overview Effect,’ a documentary about the experiences of Apollo astronauts on first seeing the Earth from above – from space!

The aim was for students to develop an understand the importance of observation in developing resilient responses to change of any kind. The video also helps to put humankind in a much wider context. It allows us to step back for a moment to observe how intimately connected we all are, and how much the planet depends on us, just as we depend of it.

While watching the documentary, students were asked to make note of at least three of the most important quotations from the video. The following is an example of one student’s responses:

The final activity for the session was for students to design their own Memes communicating some of the ideas we have been discussing in class. We had some excellent designs handed in to us, and will put up a separate post displaying them all shortly. For now, here is one particularly evocative example: 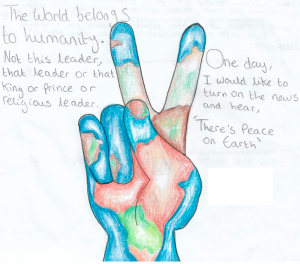 Then, on Friday, Steve and Jack returned to do a follow up session looking in more detail at the Paris Climate Agreement and the social, cultural and technological changes that we are going to have to introduce in order to meet its goals. Students were asked to plot out the Paris Agreement graph for themselves using raw figures, and to plot some key Government policy deadlines onto the chart.

Here are a couple of fine examples of students’ graphs:

We used the graph of the Paris Agreement as a stimulus for creating a timeline for change. We hoped to impress on the pupils the rate and degree of change that lies ahead of us. We also wanted to foster an awareness among students of the significance of the agreement, and that by now every country in the World has agreed to work to its targets.

We were overall impressed by the level of critical engagement from the students. They certainly have enquiring minds, and do not take our sessions without a fair pinch of scepticism. This is good for initiating dialogue! Many students have strong opinions about climate change and proposed solutions to the problem – as we discovered last week – and it is our continuing responsibility to address these issues in a constructive manner over the coming weeks.

The students, quite rightly, have a great many questions! One method we are considering putting into practice after half term is to use a Questions Box. If students have any pressing questions arising from our sessions that they want answering or discussing they can write them on a slip of paper and put them in the box. We can then go through the questions and structure our lessons around them in the following weeks.

This is an ongoing process, and we are still learning, but we are making good progress. Stay tuned for more news and updates…